Apparently doctors regularly proscribe drugs for their placebo effect.  The nytimes has an article detailing the practice.

I myself wholeheartedly believe in the effect.  When I was put on a .75 mg dose of Klonopin, it calmed me down immediately.  It actually calmed me down even before I got my prescription filled.  Later, as I was recounding the medications I was on to a nurse, she said “that’s not doing anything!  that’s not enough to be effective.”  and i said “Shush!  The placebo effect is working just fine.”

In the mean time, that might explain why I keep getting ulcers in my mouth.  My tongue has been feeling funny, and i looked at it in the mirror, and sure enough, its got funny spots, splotches, cracks, and bumps on it.  These don’t hurt as bad as the ulcers on the gums. 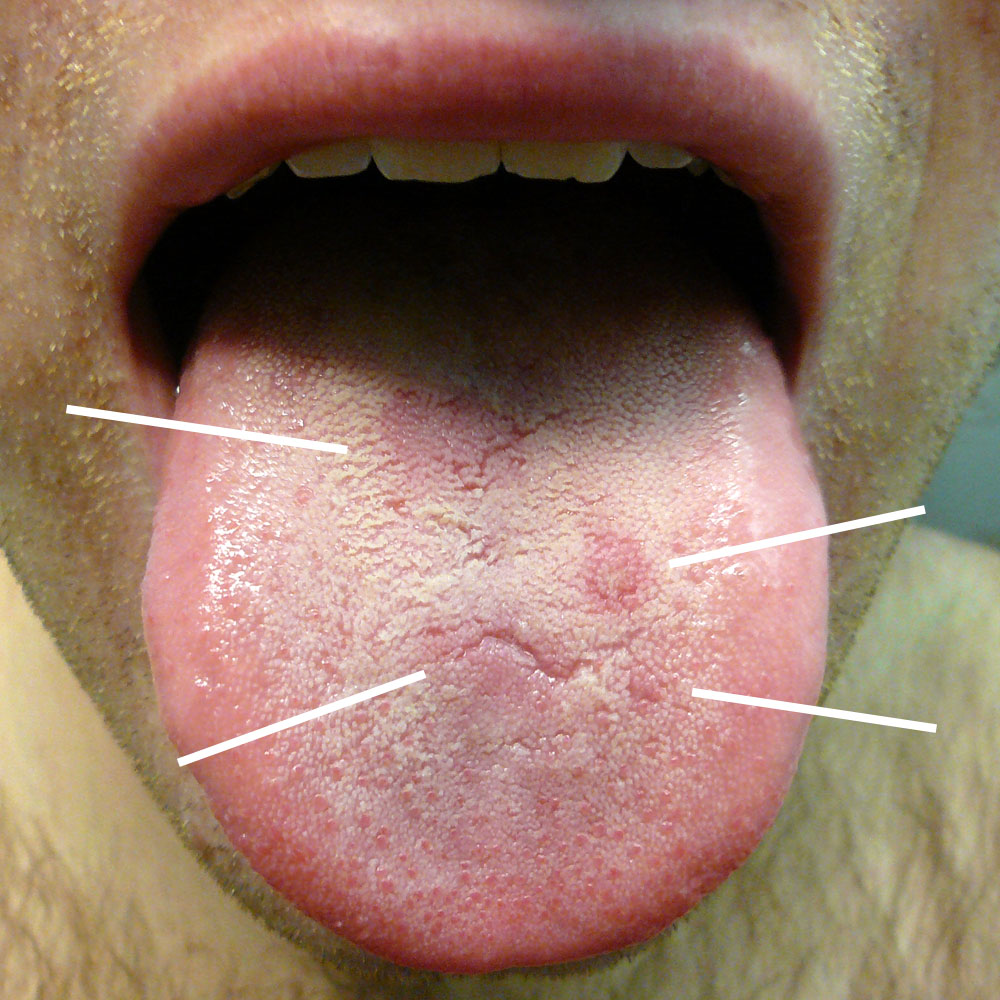 So if your state of mind is represented in the neatness of your kitchen table, and a picture is worth a thousand words, this is pretty descriptive: 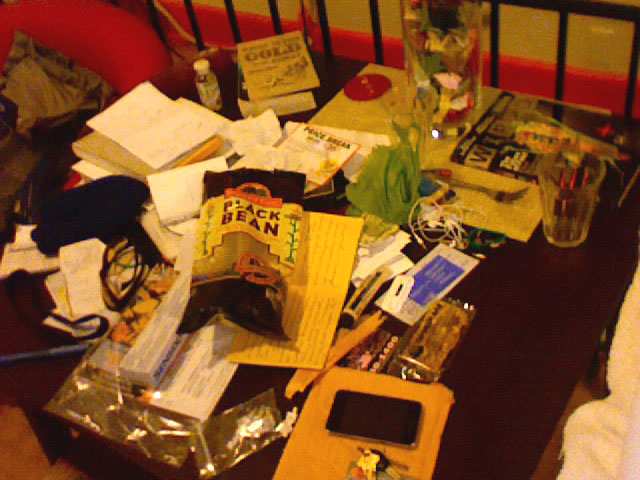 A couple of days ago I woke up early and rode my bike around the park.  It was really cold; it was 50 degrees, and had been in the 70’s for the week previous.  So I was cold at first, though nothing new.  But halfway around the loop my pins and needles came on quickly and really strongly.  Normally it only kicks in at the end of the first lap, and it goes away.

I pulled over to the side of the road.  Took off my long sleeve jersey, and pulled up my undershirt.  I almost took it off too.  I waited for a bit to cool down.  Me, standing in spandex biking shorts and a white t-shirt pulled up to my armpits.  After a few minutes I realized I wasn’t going to get much cooler.  I rode back in the t-shirt, with that awful pins and needles feeling, just trying to make it home.

tomorrow i’m going to go see a psychologist who specializes in visualization, with a focus on hypnosis and self-hypnosis.  We are going to work on techniques for visualizing the freezing air conditioned server room at the studio, where I go when I overheat.

The idea of hypnosis freaks me out a bit, but the idea of what we are going to work on is fundamentally sound.  I have started to try to think about that room when the overheating/pins and needles feeling is coming on, and it helps moderate the severity.  I can’t quite make it *stop* right then and there, but I can make it better.  So better visualization skills should help.

in other news my mouth is raw again.  not as bad as the previous three(?) times, but the cycle feels like it is still waxing, and will get worse before it gets better.

I have been noticing that I have been not-exactly-seeing-things, but having weird visual perception ticks.  I see movement where there isn’t anything moving.  Its like I am seeing cockroaches, or bugs, or something, but then i freeze my vision, and concentrate, and they’re not there.  Objects and shadows seem to be in motion.  This is recent — last two to three weeks, and I only really articulated it as a pattern in the last few days.  I remember my psychiatrist asking me about seeing things & hallucinations in one of our initial meetings about the drugs.  So I am going to head up to Columbia and we’re going to talk about it…

man… hallucinations!  i guess that is the proper term for not-exactly-seeing-things. i never thought i would have hallucinations, as i stay far away from those kind of drugs…

if you count the 4 weeks of IV IFN, i’ve done 13 weeks, which is exactly 25% of the 52 weeks of treatment.  of course, that doesn’t count my time on drug holidays.  i started the IFN on June 16th (the day before I started this blog…) Which is 4+ months ago.

I have at least one month of drug holiday time in there.  it feels like i was on holiday for more than that, though.  i guess it was just one week in the IV IFN, two weeks in between IV and SubQ, and then two weeks when i got back from Banff and was super sick.  I guess the first week back on the IFN felt like a holiday b/c I was only on a 10 MIU dose.

i was diagnosed on feb twenty-something.  I got the first call on the 20th, but didn’t formally hear the words “you have cancer” until the 22nd.  so that makes it 8 months i’ve been dealing with this.

i got chinese herbs to take.  apparently one of the hot topics in herbalism is mushrooms.  certain mushrooms are immunostimulants.  three types in particular are the focus of most of the studies: shitake, maitake, and reishi.  i regularly saute the first two, but i’ve never seen reishi before. 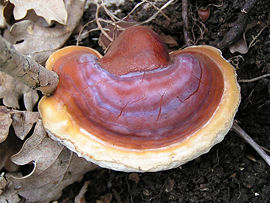 so i was in chinatown two days ago, and i thought to stop into one of the dried good stores.  frankly i was expecting total epic failure, but the first person i talked to got very excited and walked to the back of the store and showed me this box.  and explained that it was the extract of the red reishi mushroom.  the spores are ground up in capsules.

he also tried to sell me some other herbal supplements for “manly potency.”  i passed.

My landlord is trying to fix the leak that is coming from my bathroom.  While I was gone today, his contractor decided that it was necessary to rip out the shower as well as the sink.

I took a bath tonight.  A pretty strange bath.  But the first bath I’ve taken since the first surgery in February.  It took forever for the Dr. to deem my scars healed enough to be in a hot bath.  And then it was just too darn hot to *want* to take a bath.  And then I was afraid that the heat from the bath would trigger pins and needles.

Well, the bath wasn’t super hot, but I did stay in for a while, and no pins and needles.  Which is good.  I feel relaxed. 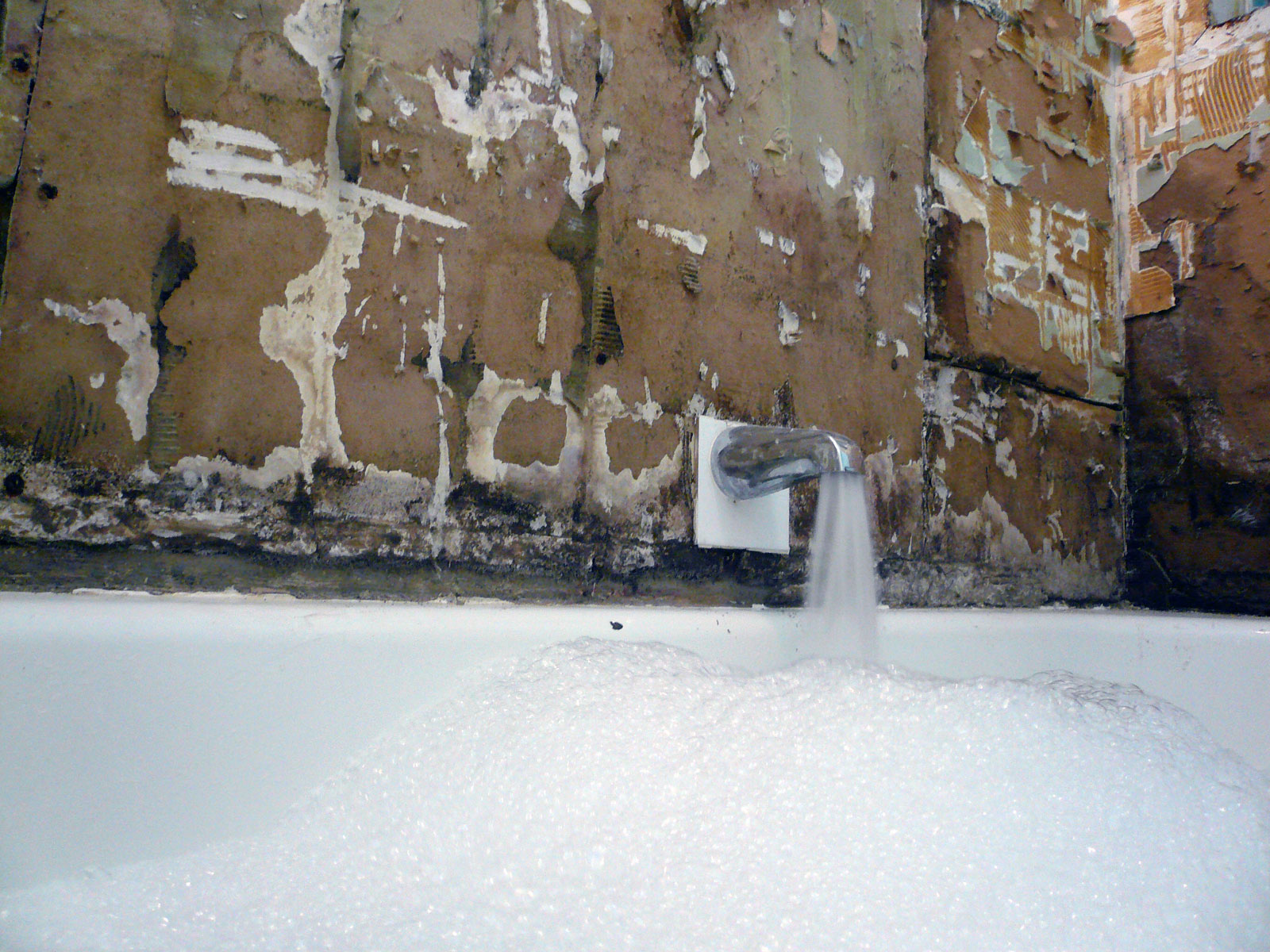 The scab over the mole biopsy that wouldn’t heal just fell off.  There is a nice closure to that.

I had a melt down earlier today.

I’ve been in and out of the server room and its refridgeration.

Feeling calmer, more in control of the chaos.